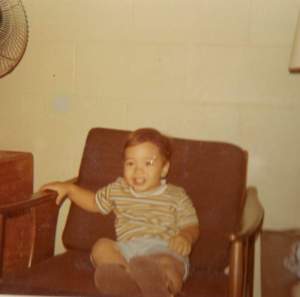 1. I grew up in Kaahumanu Housing in Kalihi, where some of my earliest memories are of peculiar neighborhood smells like stale urine, roofing tar and wafting marijuana.

2. I am an only child and all my best friends are too. That’s kinda freaky.

3. Before I started driving a truck for work, no one ever taught me any of the skills I‘ve made a living from. I think I’m just good at observing.

4. I absolutely love music, but I just don’t possess the patience or aptitude to become good at any instrument. God knows I’ve tried.

5. Of all the famous musicians I’ve interviewed over the years, the only one I was nervous about was Kevin DuBrow of Quiet Riot. I‘m not sure why. Weird, right?

6. After being bit at age nine, I was wary of dogs for a long time until I found a job that forced me to walk past dogs all the time with guys who were physically scarred from being attacked before. I still got bit by a bichon frise once, but it was OK because I knew I coulda kicked that mutt to the fucking moon if I wanted to.

7. Even with all the traveling I’ve done as an adult, I hadn’t experienced snow until 2012.

8. I figured out how to dress with some style only a few years ago. Yet somehow, I don’t have any photos to substantiate this. (Update: I got fatter since I wrote this. Just ignore it for now :))

9. Drivers on Oahu seem to either drive too slow or too fast. And I hate every one of them.

10. As I grow older, I think a lot more about my mortality. That’s probably why I feel this constant compulsion to do more and document everything because there’s going to come a day when I’m not here and I want to leave something behind that will hopefully affect and inspire others.

11. As a kid, I tried really hard to poplock, but never could quite get it. The funny thing is, I’m actually pretty good now, but no one gives a shit anymore.

14. I can watch an episode of Soul Train or American Bandstand and correctly guess its year of origin to within one year, based on the featured songs and the fashions worn by the dancers. I realize this is a completely useless talent, but I wish I could somehow make money off it because I‘m never wrong.

15. I never saw any need to go to college, but I always wanted to.

17. I was a really good wrestler in the 8th grade. I pinned every single challenger in my class in under a minute, until they matched me against a 215 lb. kid. He wasn’t a better wrestler than me; I just couldn’t move that fat, smug fuck.

18. I barely graduated high school with a “D” average.

19. I knew Santa Claus was bullshit in Kindergarten when I noticed all the gift tags were written in my mom’s handwriting.

20. I rarely go to see movies at the theater. I’ve just been burned too many times.

21. Instead of being the polite guy, I now say exactly what I’m thinking and it’s so liberating.

22. I believe whatever you’re constantly envisioning will manifest itself, good or bad.

23. There are several topics that are actually fascinating to me because I know virtually nothing about them, but I have absolutely ZERO interest in participating in, like competitive eating, prostitution, wild animal hunting and bizarre international subcultures. Like, yikes! – but whoah. Fascinated by,  but not interested in. How does that work?

25. I almost died a couple times, but that’s probably normal.